Seeking your advice on some design issues I’m struggling with. I am currently working on a series of complex financial reports, and the user requirements have each report chockablock with slicers - 8 slicers per page, plus two search/filter boxes. I’m trying to make all the slicers readable and attractive, but minimize the amount of real estate they take up to leave sufficient space for the necessary analysis/visuals on each page (note: I don’t want to use a sliding slicer panel, since I think it’s important for the users to always be able to view the current filter context). So, two questions:

Thanks in advance for your help.

Hi @BrianJ, Just some initial thoughts.
I have used slicer panels before, as well as using the new filter pane.
Also, turning slicers into dropdowns to save on space too.
Can some slicers be merged?, or maybe use the new Hierarchy slicer.
Maybe use some funky bookmarks or drill throughs.
You can change the size of the report page by customising the width and height of the custom page size, so the user can say. scroll further down to view more visuals.

@BrianJ
One thing to keep in mind is that if you are pushing these to the Service, native visualizations offer much better performance. Before the msft slicer was able to handle hierarchies I used the 3rd party version. When opening in the service it took ( and still takes) much longer when compared to the msft one. Might not be an issue with your reports, but something to keep in mind.

(though if I was to use any 3rd party visuals, they would most certainty be from OKViz

Thanks for the input – definitely good things to consider in the choice as to whether to use it, since I will be pushing all the reports to the Service. They claim that through memory management, filter mode with logical operators and incremental loading that the visual performs well even on large data sets (my data set isn’t huge – about 230,000 records currently and about 150,000 added per FY, but big enough that I’m concerned about performance), but I haven’t tested that yet on the trial version.

They claim that through memory management, filter mode with logical operators and incremental loading that the visual performs well even on large data sets

I’d definitely believe them on that. Though if you try it out could you let us know how your experience was?

Absolutely. Should have testing done later this week, and will report back.

Hi Brian. Using dropdowns for slicers is preferable for space reasons (and performance too), but doesn’t show multiple selections. You can, however, display the selected values in a matrix of measures. Here’s a sample of various slicer selection display methods. Hope this helps. Greg

Thanks for the input – this is fantastic! Slicer array is compact, but highly readable and your use of the matrix to show the full filter context for multiple selections gives me good food for thought.

Really appreciate your effort in putting this together.

Thanks to the contributors of this post. A response on this post has been tagged as “Solution”. If you have a follow question or concern related to this topic, please remove the Solution tag first by clicking the three dots beside Reply and then untick the check box. Thanks!

I’ve been running the trial version of Smart Filter Pro through its paces for a while, and can report back that at least in my view it’s everything they say it is and more.

I’m totally sold on this, and it will probably become the most used visual in my reports. I’ve attached a PBIX file from OKViz that demos all these features and many more.

Be very curious to hear what you think.

@BrianJ,
Was this on the desktop version and/or using the PBI Service. The issues I run into are generally when I (or a user) is using an App in the service.

I’ve tested it in both. Experienced absolutely no problems to date running it in the service.

Sweet! Ill have to check that out. Thanks for the updates

. Definitely report back after you’ve given it a try - eager to hear your review.

I found “Text Filter” from Appsource is a great tool for searching. And it is pretty accurate and you can have several of them. Not sure if that is what you were thinking.

FYI. Very cool new feature in newest version of SmartFilter Pro 2.2.1 - ability to display the results of a measure for each item of the slicer: 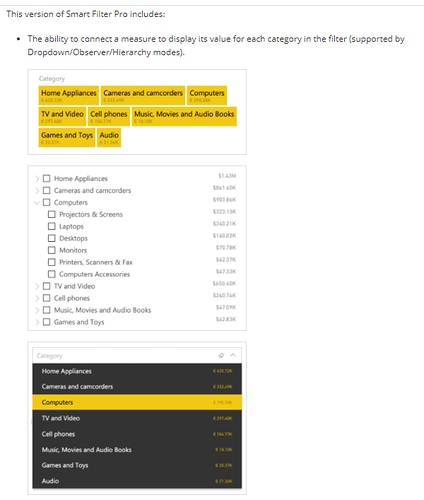