I’ve built a report set to be published in an app. There are 4 report sets (all linked to the same data model). I have them separate for two reasons

However, the user would like to be able to set a filter on the first page and have it carry through. For example selecting the current month and branch and by default changing that view for all reports. Of course this worked when all the reports were in a single pbix but broke when the reports were split.

This image shows the 4 ‘report sets’, which then if you expand shows a set of reports each. I’d like to be able to sync filters between these. 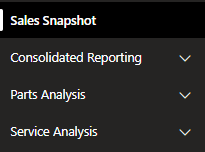 Is there anyway to have filters sync across reports published within a single app?

If not, is there an effective work around? I’m loath to rejoin the reports into a single view as the navigation is terrible without the sub-headers, and it would also stop me being able to create multiple audiences using the new app experience.

Hi @kaycee, I noticed you didn’t provide a PBIX file. Providing one will help users and experts find a solution to your inquiry faster and better.

A perfect initial question includes all of the following:

Not completing your data may sometimes cause delay in getting an answer.

Hi @kaycee, we noticed that you have not responded to our request last Sept 5th. We are waiting for the masked demo pbix file, images of the entire scenario you are dealing with, screenshot of the data model, details of how you want to visualize a result, and any other supporting links and details. In case there won’t be any activity on it in the next few days, we’ll be tagging this post as Solved.