I have developed a suite of ‘Usage Reports’ based on the provided ‘Report Usage Metrics Model’ datasets which are in each Workspace. These datasets allow us to build our own Usage Reports which look and feel much better than, what has to be said, the rather poor default Report Usage reports which Power BI offer.

Here is a standard usage report: 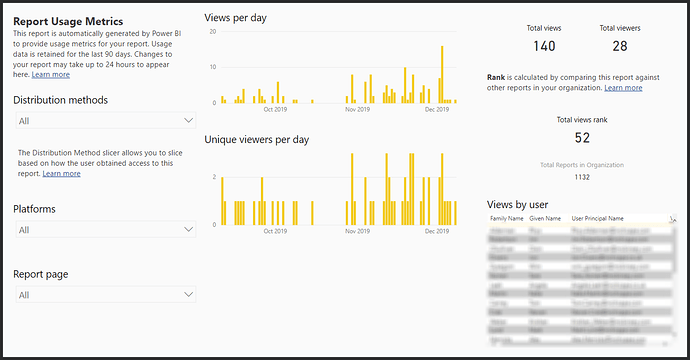 And one of my custom reports built over the dataset, allowing the user to review usage of multiple reports, but only those contained within a single workspace. 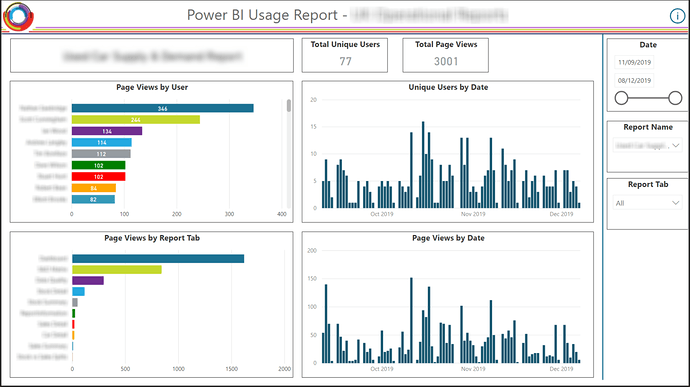 However, as we are using a Power BI provided dataset, I don’t know of a way to report over multiple workspaces / datasets in a single report, as we can only connect to one dataset at a time. This means we have to have multiple copies of this usage report, one per workspace. Ideally we would like one, which would allow us to report on global usage across all workspaces.

Does anyone know of a workaround for this? Could Dataflows help? The only thought we have had so far, is that someone manually extracts the row level data on a regular basis from each report and stores that in our SQL database, but that’s far from ideal and pretty much a none starter.

I used to monitor Power BI Service Report Usage in a similar manner with what you have described.
After a while I had issues maintaining the flow and I was not even sure about the validity of the results.

What I am doing at the moment is something similar to the article Melissa posted.
So in a few words I have job running everyday that queries the Admin portal API for the Power BI reports views accross all workspaces and I am writing the underlying data to SQL Server and I am using this as my report input. If you dont want to go through the whole process with the available API you can pull out the data manually.
see pic below 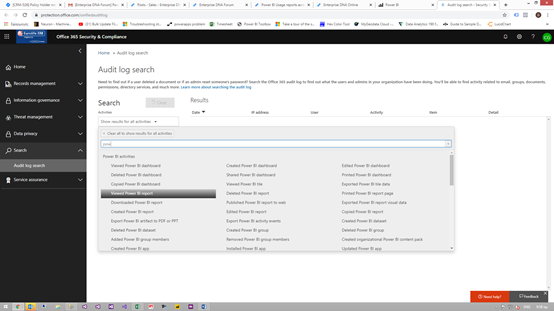 and this is a summary page 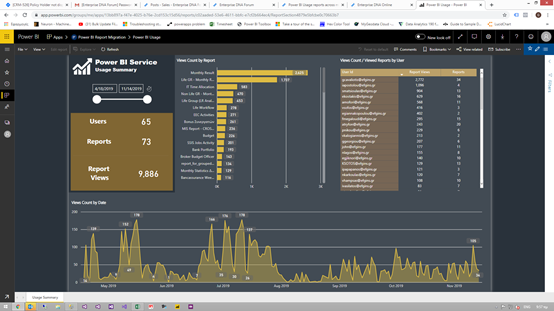 I hope I helped

Many thanks for your inputs. I will go and have a chat with our admin team and see whats possible - ultimately I would very much like to do as you have done George, where you are writing and archiving the usage data to SQL server. I may be back with more questions!

Whilst I am here, I have just noticed that my usage report is reporting exactly twice the number of views compared to the default usage report? I am using the measure ViewsCount from the Views table. Do you happen to know if this is correct or if I should be using another from the Report Usage Metrics Model?

The article Melissa shared describes it very well how this should be setup.
In regards to your question I am not sure what metric should be used.
The way I understand it Usage Reports in PBI service are much alike with the google analytics connector in PBI. You dont have access to the underlined data but instead you get access to precalculated models which are disconnected between them.

Thanks George, I will look closer at Melissa’s article as soon as I get a chance.

I will raise a support call if I can’t figure it out.