The Power BI Challenge is not about winning, but more about learning and improving Power BI and analytical skills.

One of our members is going back to the challenges that she missed and posted this for Power BI Challenge 3. 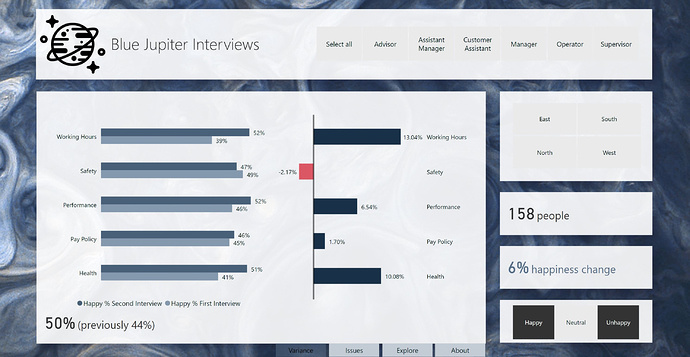 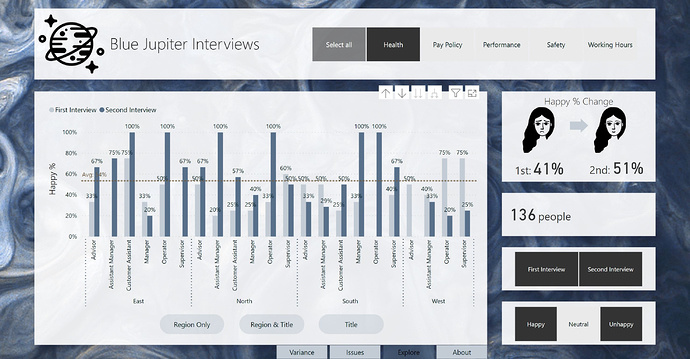 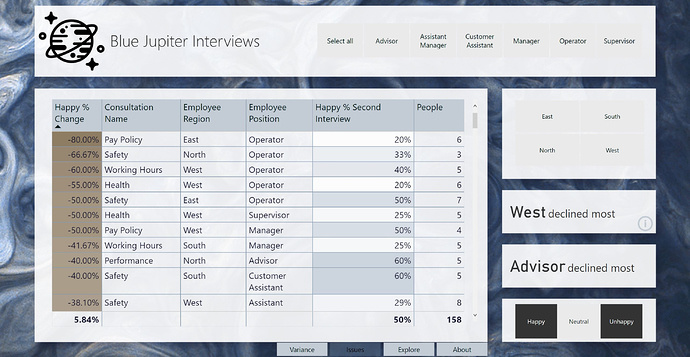 I’m floored by how quickly you put together a really quality report. If @Haroonali1000 ever just gives us a day to do the next challenge, my money’s on you.

One question - how did you construct the branching off of the drillthrough page? Is that done via conditional page navigation buttons? I dont think I’ve ever seen that structure before - very cool.

@BrianJ, thank you! I saw that blue Jupiter photo from the Juno spacecraft and decided I absolutely had to use it on a report. And it was much nicer than the last report background I made myself. I also used the color theme generator to get some colors off the image, then to get more colors I used coolers.co to get more colors and hues. I also used paint to lift the yellow color.

Ah do you mean , the “Region only”, “Region & Title”, and “Title only” buttons? That is my super secret lazy technique of choice at the moment. (I used it on mass in the complaints challenge too). It’s a bookmark that only affects that chart, which has both region and title. 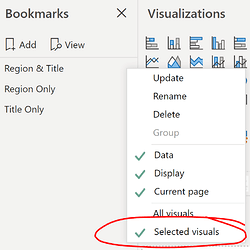 So, you can do it without the bookmarks or buttons, but it’s a little too hidden for most users.

Really cool technique - thanks for the detailed explanation. I’ve seen that “selected visuals” option before, but never used it. Now I see it’s far more useful than I realized…

@BrianJ I am not surprised by your comment as I only recently got into bookmarks, but I found the only useful bookmark makes use of that “selected visuals” option. I even have a video on it.

The biggest issue with bookmarks I’ve found is that they affect slicers, especially date ones, which is hard to see at first because it looks like it’s working as intended. then you try the report in a week and all of a sudden it keeps filtering back to the week before. I had one that because it then HID the date slicer on the selection you had no way to get back to the date to correct it. So all the data simply disappeared.

Ever since page navigation came out (particularly now with the ability to conditionally branch it, tie it to images and buttons, sync slicers, etc. ), I find I use that much more often than bookmarks – using bookmarks primarily just to reset filters on a page. But now with the way you, @MudassirAli, @Greg and others are using them in challenges, it’s prompting me to take a second look.

Where are your videos located? The one below was the only one I could find:

Interesting info about the date slicer. That’s a case where page navigation with sync slicers at least protects your original page info.

@BrianJ That’s the only video I have publicly available – and it’s terrible because there is a lovely high pitched whine throughout the whole thing ha. But that is the one. The video talks about disabling the data option as well, but for the drill down/drill through functionality to work that I have in this submission that needs to be enabled to work.