Here’s Zoe’s entry for Power BI Challenge 14. @datazoe, would you like to share how you built this dashboard and what your inspiration is in building it? 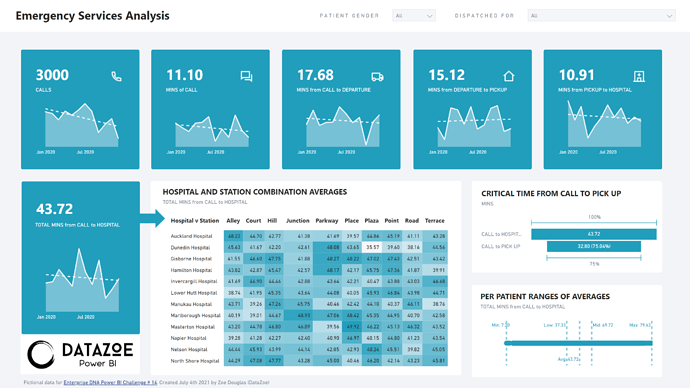 This post is part of the Enterprise DNA platform improvements. Through these posts, members and non-members can showcase the resources and inspirations on how they come up with their challenge submissions. We hope all members can utilize it efficiently

For this one, I actually did look at key influencers to see if there was anything that stood out as far as a story could go, but there really wasn’t anything, so I decided to go with exploratory/process explanation report. My goal is to make these quickly as I have been a little busy lately, so there is not a lot in the way of tooltips (which I love!).

So, across the top is the breakdown from left to right of the start/end of the process.

The start being that someone makes a call to get an ambulance, and the end being they are dropped at the hospital. Showing it broken down will allow a user to see where things may be improving or declining in level of service.

Under that I then look at the total time from call to arrival at the hospital. This KPI is a bit bigger to set it apart from the upper KPIs. The arrow then shows that this is the measure that’s being used in the heatmap matrix that shows average times by station/hospital. The idea here is that people could click on higher or lower combinations to get into why.

And finally, my favorite visual is actually the little one in the corner! I love box and whiskers but I find that one has been slow lately, so this is my out-of-the in-the-box solution. This is a scatter plot, and while it looks like a line, it’s actually a bubble for each patient. As all the other visuals aggregate to an average, this gets you into the nitty gritty details. And hovering will give you it in the tooltip too (it’s not the fancy tooltips I usually do!). 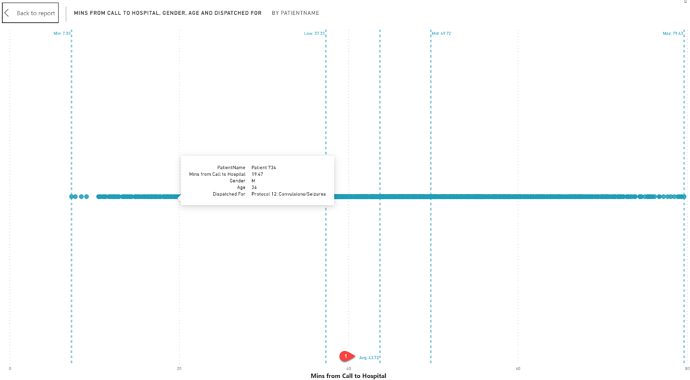 So the user can see all the values and where the average actually lies, as well as the min/max to show the full range. And I added in 33% and 66% percentile lines marked as Low and High, showing where the top 3rd, middle 3rd and bottom 3rd of patients actually were in terms of response time. As you can see, the data is fairly even, but if it wasn’t, this would clearly show it!

Things I would have liked to have added:

I used numerro, as usual, haha, but it was neat to have the different colors to play with, and this was actually the first color I chose, but then changed to the pretty teal. 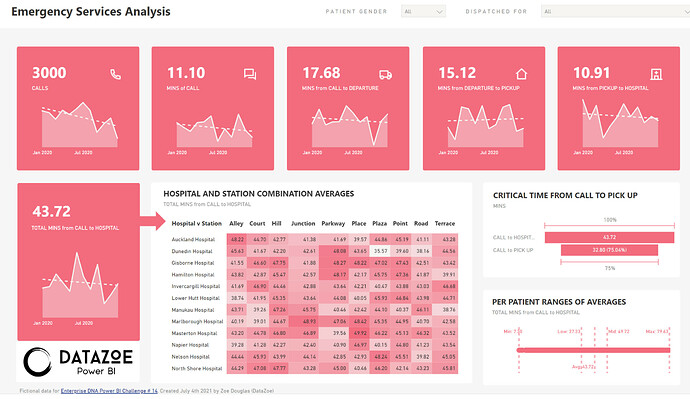