To know more i make another measure which calculate ly_cumative_sale:

Now i am confused what is going in this measure .
[Ly_sale] is replaced in Var result with its above definition. if yes then its should override the filter of outer calculate but its giving me the right result can you tell me about what happening here .

How its giving me right result .Becuze i think it should return the Ly sale value again.

The outer filter of the calulate will only be over-ridden only when you reference the “Variable” just besides the CALCULATE function. Right now, what you’re referencing is the measure itself and not a variable so it’s using a measure branching technique right now. 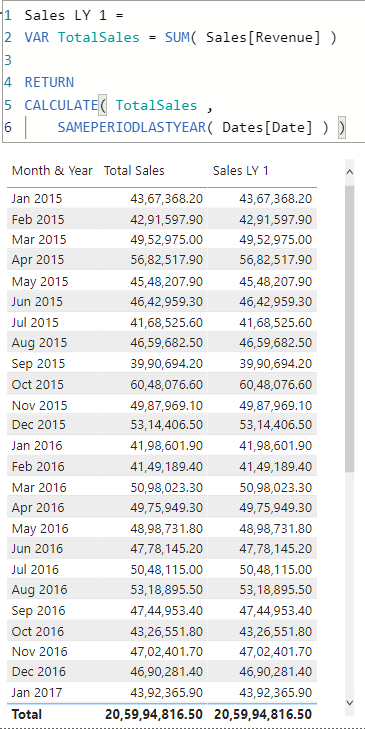 So in the above screenshot you’ll observe that when you reference the variable just besides the CALCULATE function it’ll simply over-ride the outer filter context and will provide you the same results. 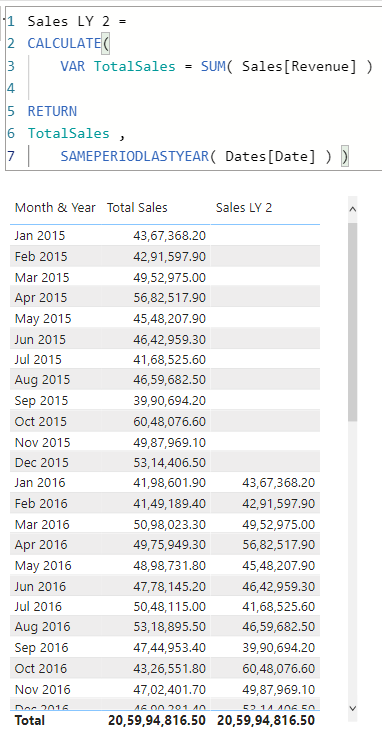 And now, if you observe the above the screenshot, you’ll see that in order to consider the outer filter context while using the “VARIABLES” technique I’ve used “CALCULATE” function right at the start of the formula so that it evaluates the results correctly rather than providing the same results as we witnessed in the previous screenshot.

I’m also attaching the working of the PBIX file for the reference so that you can go through it. Also I’m providing a link of the article as well as of a video below which will further clarify your concept/take on this.

Hoping you find this useful and helps you to understand the conecpt more clearly.

Caution When Using Variables in DAX and Power BI - RADACAD

I have written another blog post about variables previously and explained how useful variables are. Variables in DAX are helpful in both readability and also the performance of your code. However, there are scenarios that you have to be careful when... 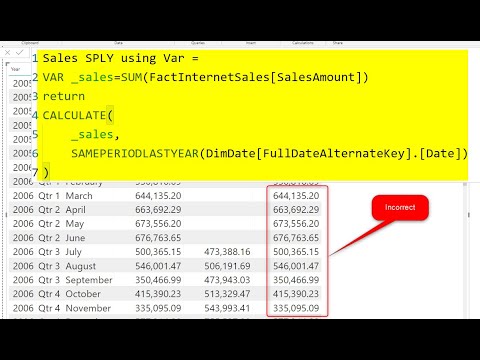 Could you please explain ?

When we are creating VAR outside calculate, VAR doesn’t effect with Filter context coming from Calculate, that’s we are seeing same numbers.

When we are creating VAR inside calculate, first it applies the filter context and then it evaluates expression in first argument

But here its different.

Here the filter context is on Calendar Date in both the calculate, but its not override

Could you please test this ? Why the measure not considering year filter coming from Table.

[Ly_sale] is replaced in Var result with its above definition. if yes then its should override the filter of outer calculate but its giving me the right result can you tell me about what happening here .

As you’ve suggested, “Here the filter context is on “Calendar Date” in both the calculate, but its not override” - Nope. The query was regarding as per the above quoted statement - about why “[Ly_sale]” is giving correct results when placed with the VAR. For this, the answer is already provided above.

And another query which you’ve asked that is -

Could you please explain ?

So when I created the measure as per the conditions provided by @Anurag then yes, it will give you the correct results. Below is the screenshot of the result provided for the reference - 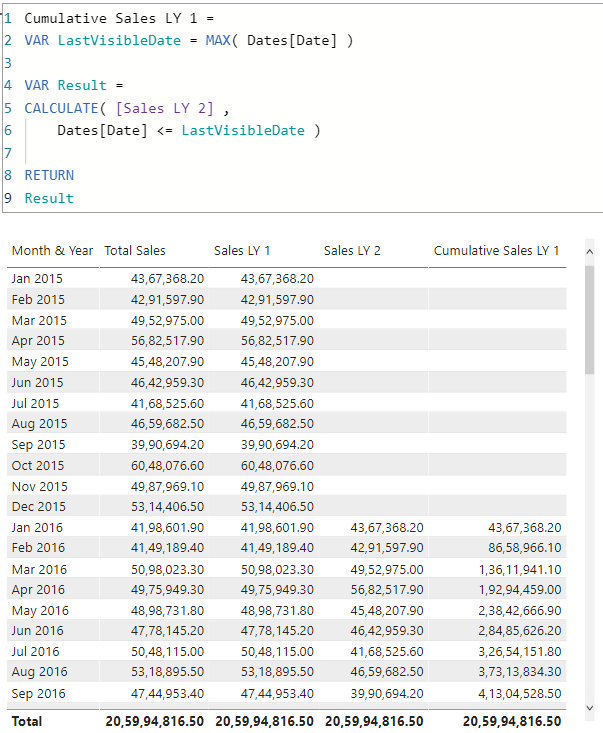 Also if you’re thinking/wondering that how it derived the correct results without using FILTER( ALLSELECTED( Dates )? Then the answer is - It’s not mandatory in this case to create a filtered table of Dates and then within that mention this condition - Dates[Dates] <= LastVisibleDate because the syntax of the CALCULATE function by default involves “FILTER condition” so whether you use FILTER function or not it doesn’t matter in this case. Below is the screenshot provided for the reference of both the results and you’ll observe that both the “Cumulative Sales” measure yields the same results irrespective of use of FILTER function. 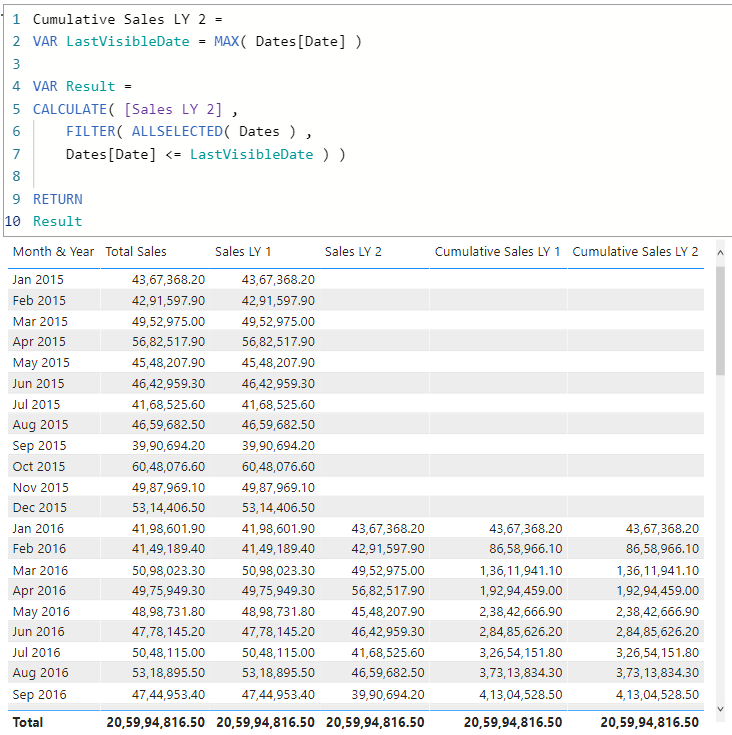 The only important thing here to be noted is that one needs to understand when to include/exclude the FILTER condition otherwise it’ll lead to ambiguous results. And that why it’s always “suggested” to use it in order to prevent from deriving the ambigious results but not at all “mandatory” which @Anurag has used in this case .

Lastly, I’m also attaching the working of the PBIX file for the reference.

Hoping you find this useful. 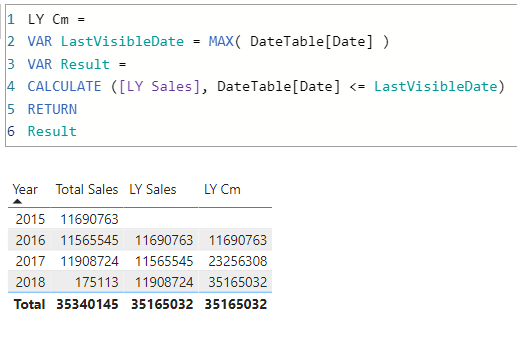 @Harsh Thanks for your immediate response

Sorry to bother you.

My Question is why the measure not consider Year filter coming from Table.
It should give the same result as Total Sales right ?

Had your formula been something like this as provided below then it would have derived the same Sales amount as you’re expecting. 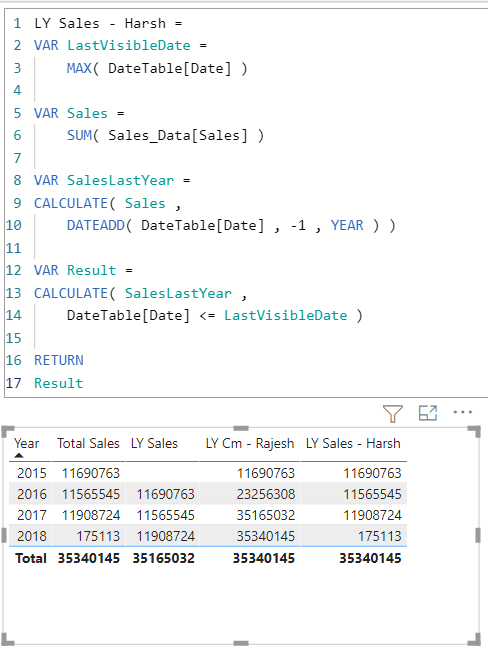 In layman’s language if I put it - It’s just an habit which we’ve developed to use it.

Attaching the PBIX file for the reference.

@Harsh Thanks for helping me.

Let me explain clearly my problem.

I’m not using any measure now.

Result3 - This is equal to Result 1… but both are giving different results.

Result4 - This is equal to Result 2 … This is Fine

Once again Thanks for Helping

For the DAX engine the expressions Result1 and Result1Full are exactly the same.

play around with this.

Thanks @Melissa and @Harsh

I really don’t know about this form of a predicate with a single column reference.

Seems you’ve got it now @Rajesh

That’s really good that you came to know about how the expression and argument actually works under the CALCULATE function.

Lastly, before we sign off from this thread. I would just like to shed some light about how “Result1” is different from the “Result3”.

When we reference the naked table under the FILTER function it firstly generate the whole table virtually. Now, since we’ve haven’t wrapped that table under either under the following function “ALL”, “ALLSELECTED” or “ALLEXCEPT”. It won’t able to recognize which function to adopt by default out of these three. And since it’s not able to categorize which one to use it’ll simply discard the FILTER function as good as making it null and void.

And that’s why it provides the same result i.e. “Total Sales = Result3”

Hope now everything is sorted on this thread.

@Rajesh The outer filter context create by Dates[Date] <= LastVisibleDate creates a list of dates, and in this filter context the inner CALCULATE evaluates DATEADD and then shift these dates by 1 year.

both are different fields, but it is overwrites why ?

When the relationship between 2 tables is based on dates data type and if dates are getting filtered then engine internally adds REMOVFILTERS to your code. 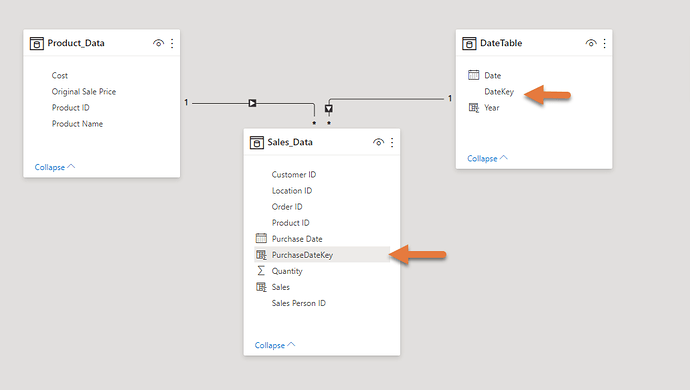 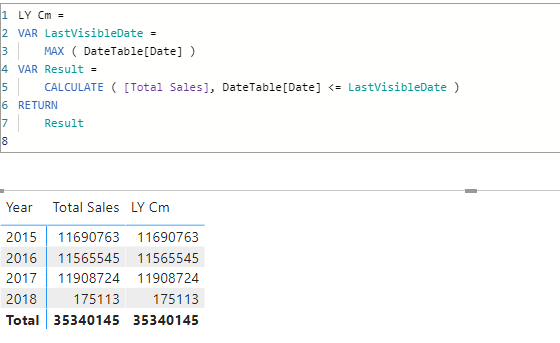 If you mark it as date table : 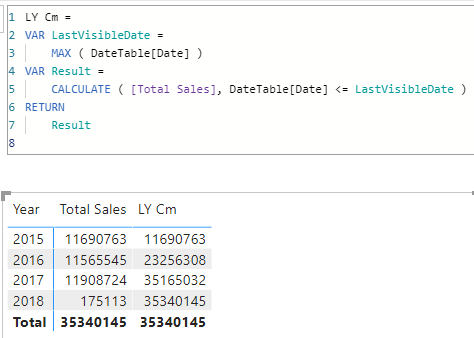 If you mark it as date table, then you need to restore filter over Year by using VALUES ( Dates[Year] ) and not with KEEPFILTERS

So it depends on the relationship fields. Could you please provide the documentation link on this ?

If possible please create a separate topic on this so that helps others to understand how the DAX engine works.

I found article related to this in SQLBI. I’m sharing the link

Tabular models (including Power BI) require marking the Date table as a date table to get appropriate results with time intelligence calculations. This arti