CALCULATE SUM based on TopN

I have a table with TopN based on two different tables and I used crossjoin function to get its rank.
Now, I would like to combine/add things together that have the same entity/name.

As you can see here on the snapshot, I have the same group name but lies on a different TopN group and I wanted to combine or add this together so that it will be on its rightful TopN. Attached is my pbix file and the measures that I used. Appreciated your time doings this. Thanks! 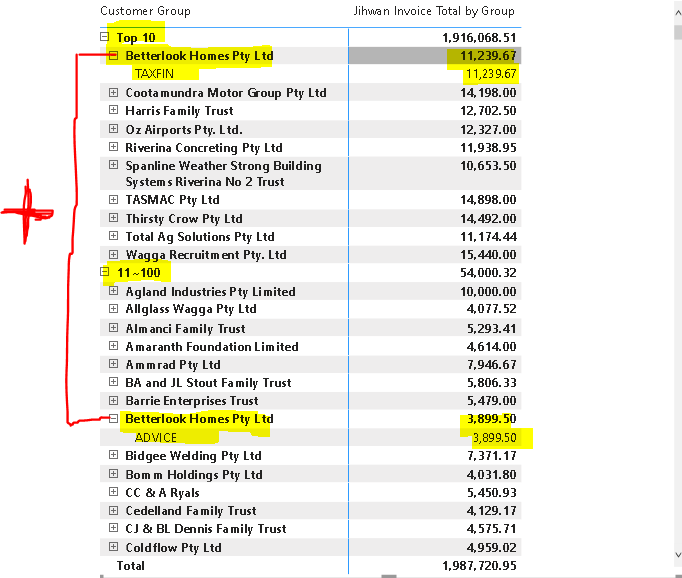 This is the RANKX measure. I used crossjoin to rank on two different tables.

Firstly, the formulas that you’ve provided onto the post as well as the scenario that you’ve highlighted was observed nowhere into the file.

Apart from that, coming to the solution now, you had created “Many-to-Many” bi-directional relationship into the model and that too between the Dimension tables i.e. between “Customer” table and “GropedFinalisedInvoices” table. Below is the screenshot provided for the reference - 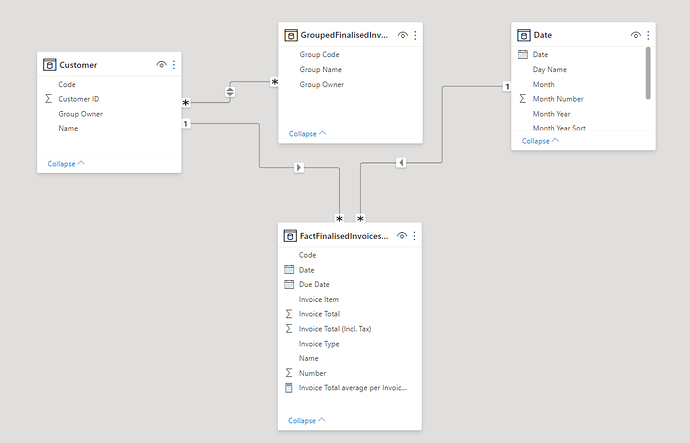 So now, since you’re trying to create a hierarchial grouping based on Ranking technique and evaulate the “Total Invoices” results based on that. This technique is complex to achieve -

Firstly, you’ll be required to break ties since there’re multiple invoices with the same amount. So to break the ties below is the formula provided for the reference -

Once you break the ties, you’ll be required to calculate the ranking by adding the context of the “Invoice Type” within the Ranking measure since your next hierarchy after the “Group Owner” is “Invoice Type”. Below is the formula of the ranking provided for the reference -

And now, once the ties are broken and context of the hierarchy is added into the Ranking Technique than you’ll be able to group them using the “Grouping and Segmentation Technique”. Below is the formula provided for the reference -

Rather since you want to use this pattern of formula i.e. SUMX rather than CALCULATE than the formula will be like this (Note: But first you’ll have to create the previous formulas like I’ve mentioned. Don’t use this formula directly) -

Now, see the results. Below is the screenshot of the final output provided for the reference - 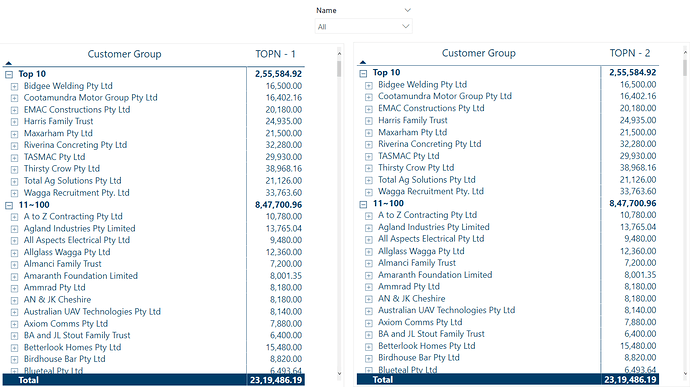 Lastly, if you see the totals of your results and compare it with mine. You’ll observe that your formula considered the range of Group Owner even after 700 whereas my formula will stop at the range of 700.

I’m also attaching the working of the PBIX file for the reference. And if you want to cross-verify my results you can go to the “Cross-Verification” worksheet for that as well.

Important Note: The sorting is possible either for the Grouping or for the Numbers. Both are not possible at the same time.

Hoping you find this useful and meets your requirements that you’ve been looking for.

serve that your formula considered the range of Group Owner even after 700 whereas my formula will stop at the range of 700.

I very much appreciated on what you have done on the solution, it’s very detailed, very informative. Will take note of all your advice.

With that being said, this leads me to another concern which is the total average of the invoice and the count of jobs being displayed. The calculation seems to be on point however when I include them, the topN is being disregarded (if that makes sense).

Once again, thanks for your time and effort in doing this. Do you have some sort of a tutorial on the web so that I can subscribe to it? Cheers! 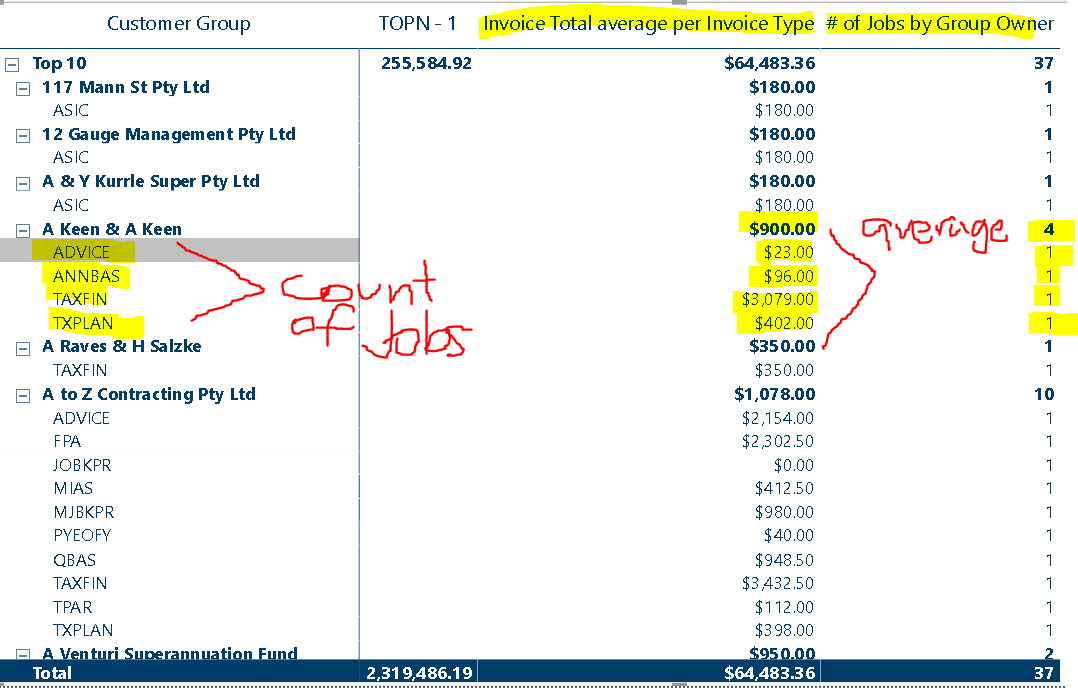 I’m glad that I was able to assist and guide you.

So, the reason you got these types of results for the “Jobs” and “Average” metrics is because the contexts are totally different. The context that we’re referring in the table visual is of “Grouping and Segmentation” technique so the formula/measure also needs to be as per that context. Now, what happened in your case was you wrote simple formulas which would workout in simple scenarios but here the scenario is different i.e. it’s a “Grouping” scenario so measure needs to be writtten accordingly.

Lastly, for average I’m seeing the same results as actuals so I’m not sure how you want the results for Average to be. But again, just remember whatever the logic is, just convert them into the “Grouping” scenario and you’ll get the results the way you want.

I’m providing below the screenshot of the results for the “Jobs” as well as “Average”. And again you can cross-verify the results by going through the “Cross-Verification” worksheets for the same. 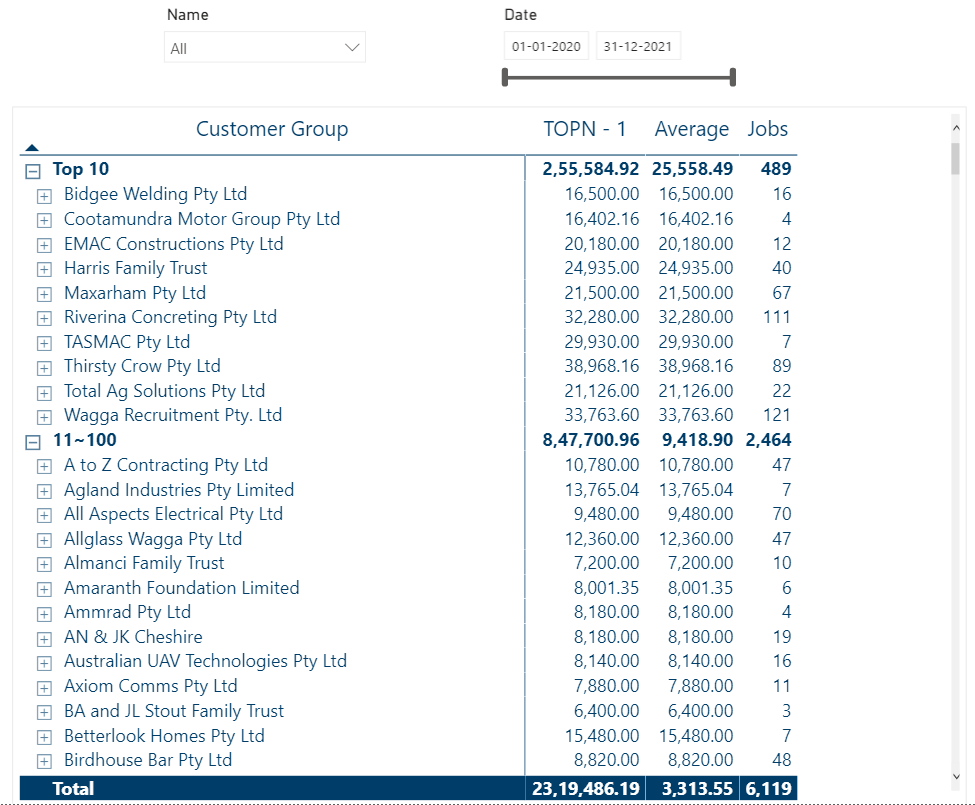 I’m also attaching the working of the PBIX file for the reference.

Lastly, before I sign off from this thread I also noticed that you were using the DAX for Date table rather I would sincerely recommend you to use the M Code for creating the Date table. Our expert @Melissa has already created the codes and are available under the M Code Showcase which is ideal and compact which one could have in their data model. Below is the link of the M Code Showcase provided for the reference as well.

Do you have some sort of a tutorial on the web so that I can subscribe to it?

Well, the answer for the above question is - “No, I as of now, I don’t have any tutorial videos over the YouTube

. But do subscribe the Enterprise DNA YouTube channel where lot’s and lot’s of great content is provided by Sam Sir as well as by our other members of the experts team on a day-to-day basis. And I’m sure you would not like to miss out on this.”

Hoping you find this useful and meets your requirements that you’ve been looking for.

Thank you very much for all the things you do here. Really appreciated it. Yeah I am subscribing and as I progress, I 'll contribute something here on this awesome community, same as you do.

Thank you very much for all the things you do here. Really appreciated it. Yeah I am subscribing and as I progress, I 'll contribute something here on this awesome community, same as you do.

You can’t sort this do you? Or the thing that you said, it can’t be sorted two at a time.

I’m glad that you found the solutions helpful.

You can’t sort this do you? Or the thing that you said, it can’t be sorted two at a time.

No, as suggested earlier. Not possible to sort two things at the same time. It provides the results but the only thing is not in a chronological order or from higher to lower.

Lastly, I’m really happy to see that you want to make the contributions to the Community which is absolutely great thing. The best way to learn is by sharing and helping others.

I really look forward to seeing your posts in the Community.