Who has been using the Analyst Hub?

I’m interested to hear your thoughts on the Analyst Hub for those with access from the pre-sale.

We’re still working on cleaning up some bugs but overall my experience playing around has been really positive.

Let’s collab here on it…

Did you know that you can share direct links to the Analyst Hub directly in the forum?

@sam.mckay
Have been getting used to the navigation part which I really love.
I tried to do the testing in uploading the project however, after completing the project when I go to Documents to make the changes, it goes into loading mode and don’t show my Documents. 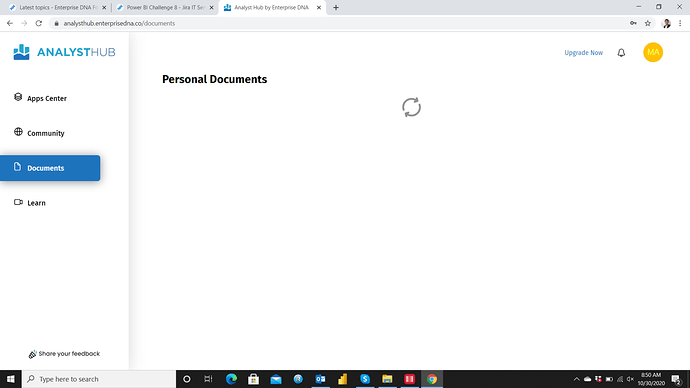 I noticed there is another community feature there. Is that going to to be a separate forum with different information? I also had to create a different login for it - so that’s one for the training, one for the forums, and another for the analyst hub? Unless it’s possible that I did something wrong there. It would be helpful if one login gave you access to all you have.

@TonyaM Yes, the Analyst HUB is different and you have to sign up for it.

It’s a whole different portal of PBI enthusiasts where you can save, format, edit and share your DAX formulas with Community members. You can also create, share and collaborate with Teams to help you out on project(s) and packed with whole other exciting features.
@sam.mckay did a video about it a week ago. 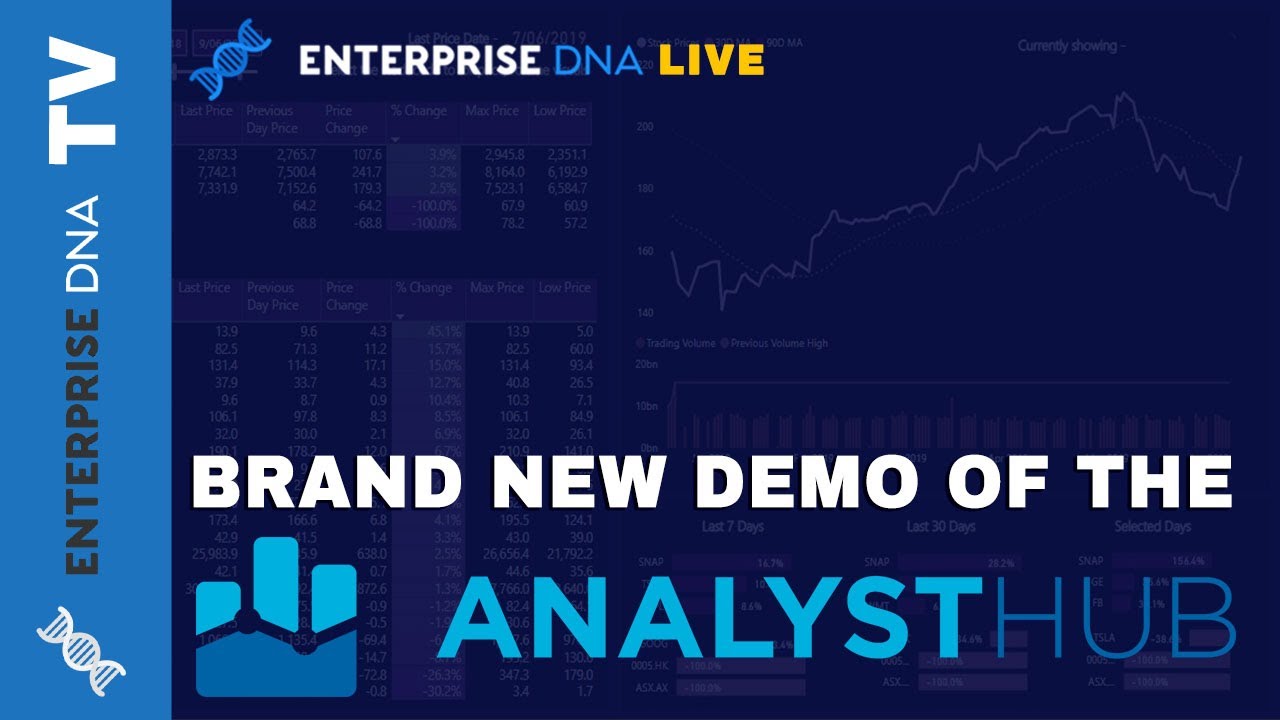 Let us know if you have any questions about AnalystHub.

It’s great – you and the development team should really feel proud of what you’ve accomplished with this. The overall look and feel is gorgeous, and the navigation is really smooth. I’ve been focusing primarily so far in getting my prior challenge entries loaded into the portfolio. I really like the ability to develop a publicly shared portfolio, and think the presentation in the Analyst Hub app is great.

Even if the formatted version had to be truncated with a “show more” option to maintain consistent spacing that would be fine with me.

Will continue to provide feedback as I delve more deeply into the other modules.

We’ll keep working on building out and optimizing everything mentioned above as it makes sense to me.

Ok will look into this Mudassir. That shouldn’t be happening, but will try to replicate.

Totally agree this would be nice. It’s just not as easy as it sounds. We definitely want this. We’ll get there

Agree on both of this Brian.

We’ll work on them.

Make sure to add any ideas or feature request here.

This is how we are capturing all the feedback we can, so it can drive where the analyst hub goes into the future.

I’m really liking how others are starting to use the community feature. This is what I always dreamed about. Seeing collaboration built into these custom Power BI apps.

It’s working well from what I can see. And it’s only going to get better.

I think it is working really well. One question – if we were to start loading @Greg’s DAX Patterns code into Analyst Hub , what do you think would be the best way to do that to keep different variations of the same pattern “grouped together”? Common nomenclature in the title, in the description and/or comments in the code itself?

Right now it appears only the titles are searchable, but I wasn’t sure what the longer-term search capabilities would be. If the code itself ultimately will be searchable, that seems like perhaps the best alternative for tagging, since we can add the pattern code in a DAX comment line, and then as long as the code is copied verbatim it doesn’t matter what people title it, it will still be findable via search…

Yep totally agree on this and will be making it a priority.

Agree the search area and functionally can be improved. I think we will aim to add to this over time, as I want to make sure we prioritise the additional apps first and then we’ll work on this.

Regarding formatting. Sure whatever you believe works well here. I don’t want to be prescriptive myself, I want to leave it up to the community and individuals to do what they want.

I like this grouping idea for formulas and patterns. Some sort of tagging would be good actually. I’ll discuss this with devs

Your post got me thinking, and while it’s still a bit of a hack, check this out:

@sam.mckay, OK - it’s a bit of a hack, but check this out - M code image with animated GIF showing the result, and then when you click on the link, it takes you to copyable TXT version of the code. Animated GIFs created in SnagIt work great in Portfolio… Show the potential of linking docs across apps… Brian

Generally, I’ve been communicating my feedback about suggestions to improve Analyst Hub within the app, but this one will probably work better through screenshots, so I’ll post the detailed explanation here and then link this post in my suggestion on AH.

Formatting in DAX Cleanup is quite good, but there are still a couple of recurring issues I wanted to point out. This measure that I just posted on AH is a good illustration of both: 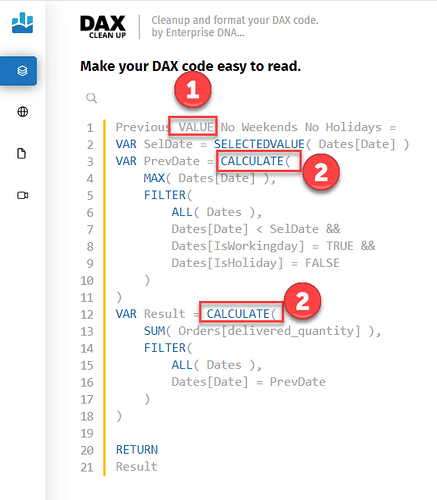 Issue #1: DC puts in all caps any word that corresponds to a DAX function, even if that word is used in the title of the measure. I think that anything to the left of the = in the first line should be left unformatted. User’s title should not be overridden.

Issue #2: For variables, anything after the = should be put on the next line and then formatted according to the program’s formatting rules. In this case, “CALCULATE(” for both variables should be on the second line of the variable declaration, not the first.

The third thing is just a personal preference raised for consideration - I think adding a blank line after each variable makes the code more readable.

Here’s the revised code with all three of these changes made: 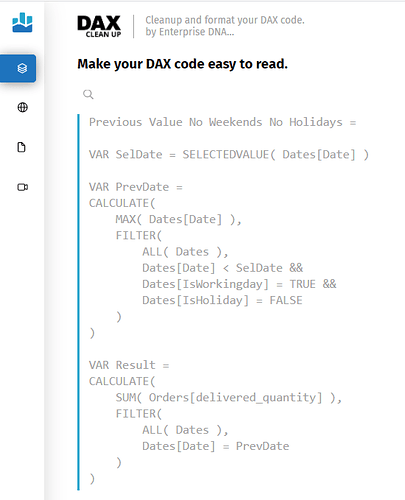 Thanks for the opportunity to provide feedback. Overall, really enjoying using AH and finding new uses every day…