Here is my submission for Challenge 5. I will provide a full write up after all the entries have been posted. My objective in this challenge was to provide screens that provided the following info:

Did a bit more DAX than usual with this one, but was able to get this one done very quickly. Looking forward to seeing all of the other entries! 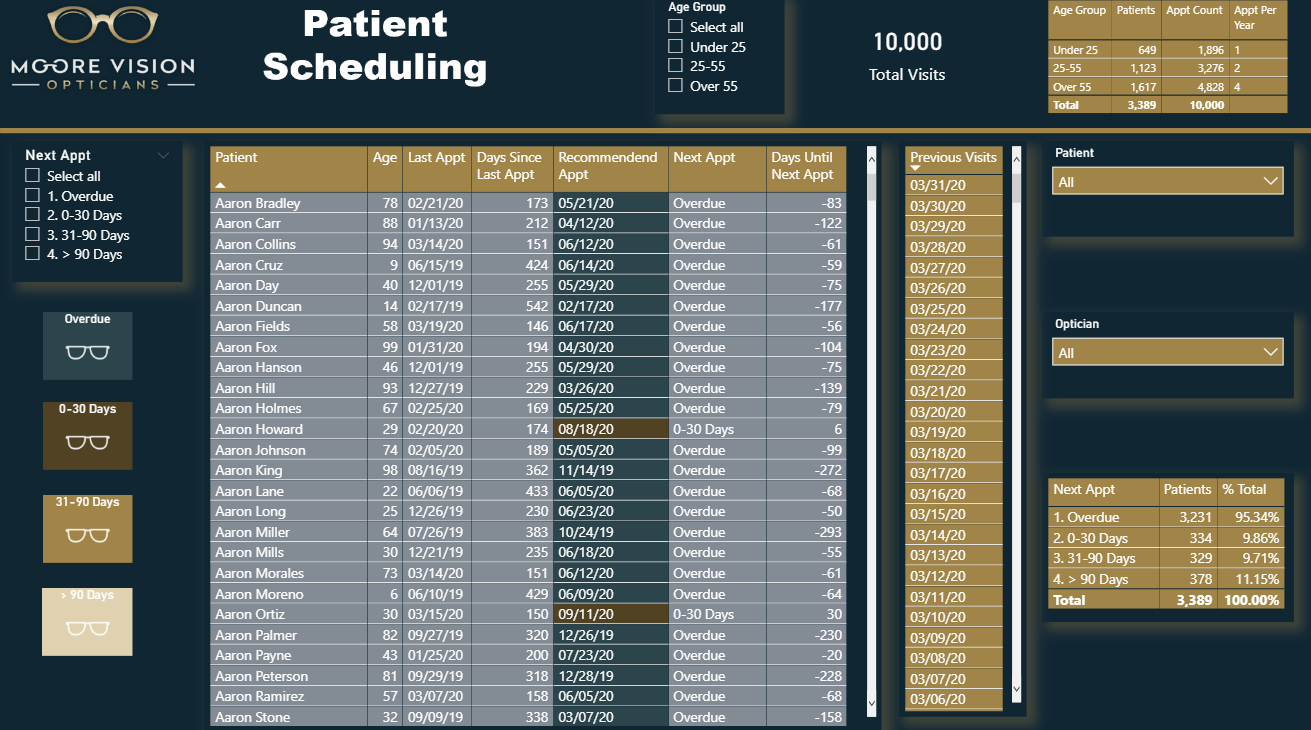 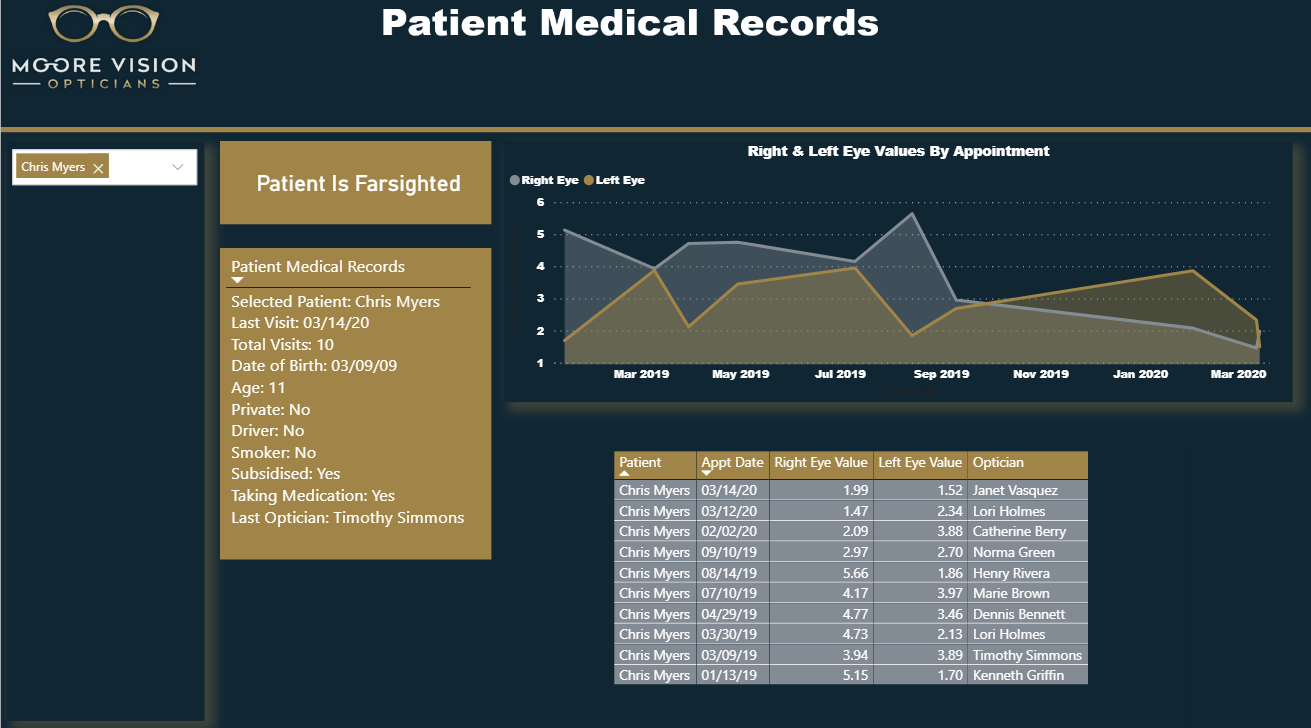 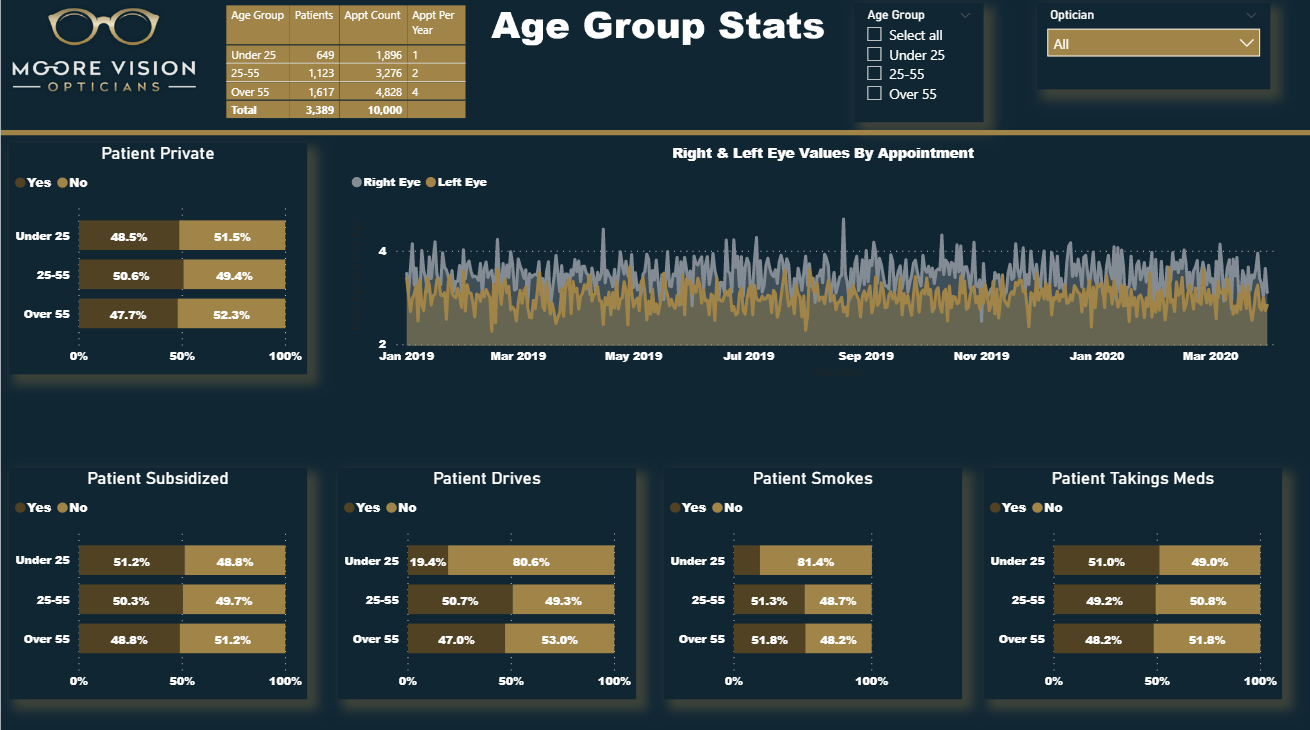 Here is the link:

@Melissa This is just wow!
Looks like the report covered everything from A to Z.
Excellent submission !

I’ve been wondering when you were going to roll out the heavy artillery in one of these challenges, and I guess now I have that answer. This is beyond brilliant, with better functionality then many full-blown commercial scheduling apps I’ve used. And it looks terrific.

I can’t wait to start digging into how you did some of this. It looks like we’re holding off posting the PBIX files until the challenge closes, but can you please post a publish to web link so that we can play with the full functionality of this report?

Hi uriah1977 ,
Thank you for you for your great feedback. Even though you created an impressive report before I even try to think about creating a report.

Thank you both so much for your kind words, really appreciate it!
I’m sorry to say I can’t publish to web within my tenant but will definitely share the PBIX file in the final write up after the closing date.

What I love most about seeing all submissions - is that although we all start with the same dataset - everyone finds a different way to get amazing insights from it and create appealing reports.

Here is my submission for eDNA challenge #5, Optical Data. 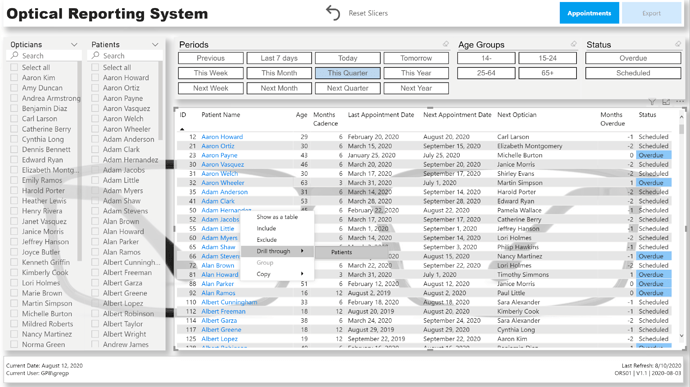 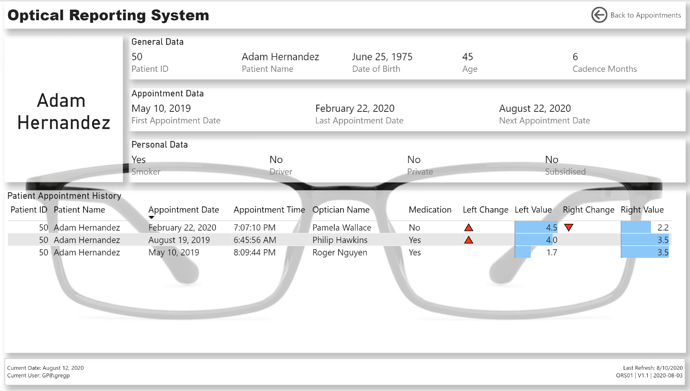 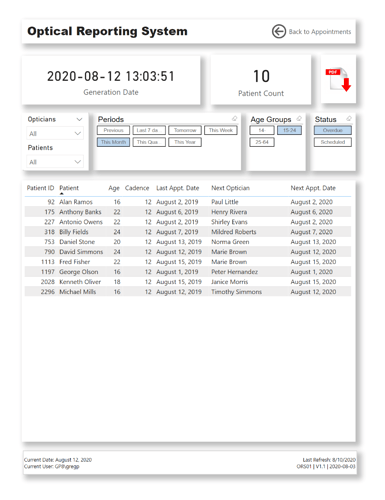 @Greg Good report and great explanation of what you have done in the report. I like the PDF export concept in the report too. I was wondering how you did you calculate the Next Optician for a particular patient.
Are next optician was selected randomly or you used/assumed a particular concept behind this?

I just made an assumption.

Some incredible submissions so far.

Looking forward to getting into my development today.

Below is my submission as Newcomer. 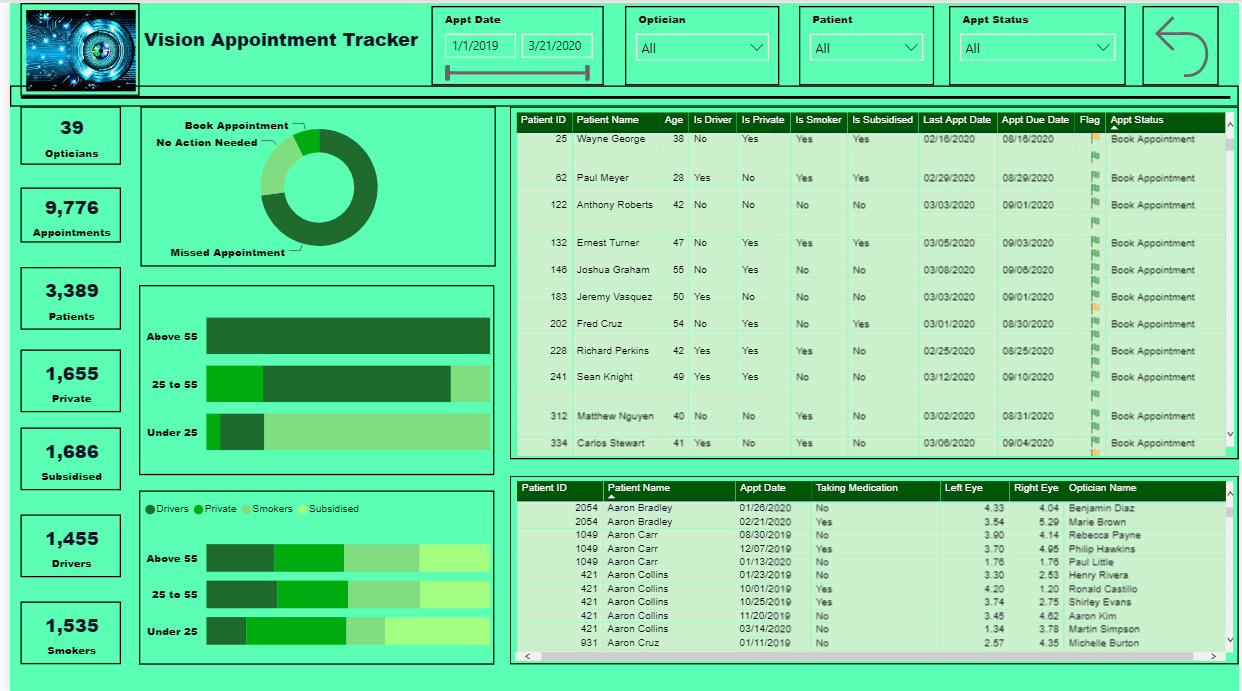 The main goal is to track patient’s appointments.

Wow this is good

We are seriously lifting the bar some amazing entries and techniques on display.

No but seriously some amazing entries and great to see some new faces joining in.

I’m looking forward to reviewing your submissions and sharing some feedback with you.

Any one sat on the fence, there is still time to join in so get involved you wont regret it.

P.S Some great prizes on offer for the new entrants category be sure to check out the post below.

All, Shout out to @bafuzie and others submitting first-time entries to this Data Challenge. I really believe that regardless of your experience level these challenges are among the best ways possible to quickly build your Power BI skills. To try to encourage more members early in their Power BI journey to participate, I am offering the following choice of prizes to the top Newcomer entry, as judged by @haroonali1000 and the Enterprise DNA Team: a copy of the Definitive Guide to DAX, 2nd Ed…

I like the way you structured your report, and showed all of the data that was required. One area I would suggest to improve on is the color theme. This is one thing, even if you are a newbie to Power BI , can help take you to the next level! First of all, I will proclaim that I’m color blind, and without the help of additional tools my report color schemes would be awful. You have a great image in the top left corner of the report. Use this to your advantage, and create your color scheme off this. Here are step by step instructions to help create this.

I also use this website as well to compare:
https://imagecolorpicker.com/
** All you do is upload your image, and here is what it came back with** 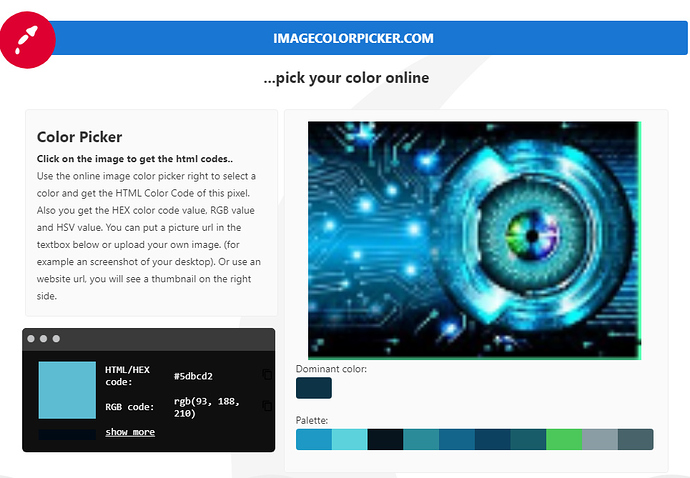 ** If you want to take these colors a step farther and create your own JSON theme, go to this site and enter all of the HEX codes: https://themes.powerbi.tips/

Selecting a color scheme is very first thing I do when I’m creating reports. Nothing beats a great first impression!

#NewToPowerBI.
My Submission to this challenge 5. Tried to create a simple Dashboard with Key information.

Screen1: All Key info about Patient including Upcoming and historical Appointments. 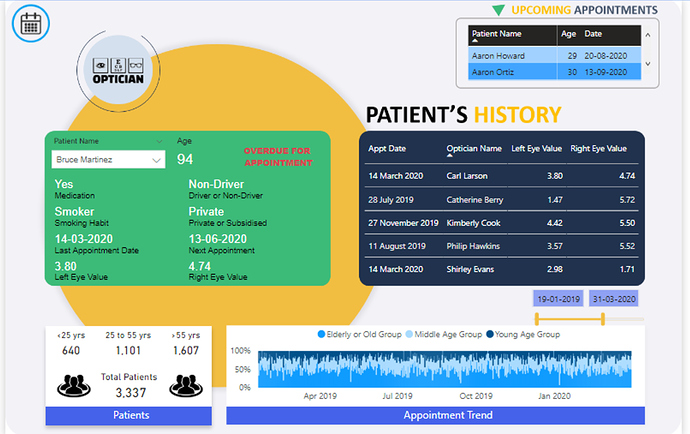 Any constructive feedbacks are welcome. #LearningFromEveryone. 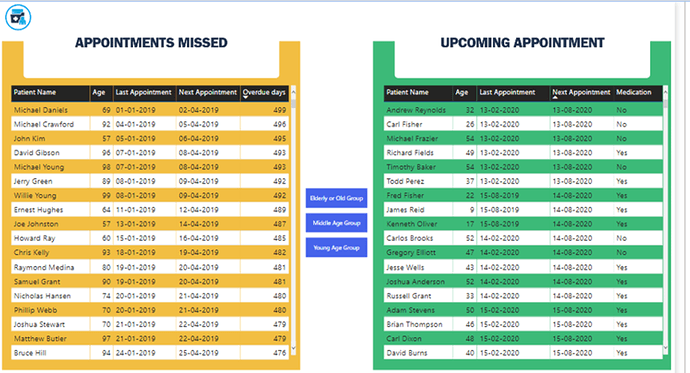 #Power BI Challenge 5 - Optical Data.   Optician Dashboard with Patients info + appointment data. With Each Patient, one can view the historic appointments not just the most recent. Second report with list of patients due for appointments...

@JarrettM
Thank you very much for your input and feedback. I am learning a lot with the challenges and valuable feedback from others. This will really help me for next my challenges.

Thank you very much! I have to say, first time on the community, I’m blown away by peoples designs. The standard is amazing.

It’s interesting to read that you choose to do the heavy lifting in Power Query. I consider you as a DAX Jedi so it could be so easy to go for the DAX again and again. What I can learn from this is that DAX is just a force among many forces.

You raise an awesome and very important point here that I think is relevant to the vast majority of us here on the forum. The eDNA content does SUCH a good job on DAX training, that for almost all of us that’s our comfort zone.

However, @nick_m and @melissa have both said something to the effect of (and I’m grossly oversimplifying here) “if something can be done upfront in Power Query, it probably should be”. This was a huge revelation to me, but as I’ve tried to implement it more and more over the past few months rather than just jumping right into DAX, I’ve come to realize that in many/most cases, it is the best approach both from a performance standpoint and also in terms of making your DAX much simpler and easier for others to understand.

Toward that end, I can’t recommend @melissa’s Enterprise DNA TV YouTube Videos highly enough. By working through these in detail (often multiple views per video) and forcing myself in my own work not to jump immediately into back DAX when I struggle with PQ, I’ve started to gain a much more balanced skill set that has been enormously beneficial. It’s hard work at times, but also really rewarding because, while totally different in structure and operation from DAX, M code is incredibly interesting and powerful in its own right.

So, you are spot on in thinking about DAX as just one force among many.

Once again I look at these and fail to see how they help us to get any better.

I look at the submissions and figure why am I doing this I’m not a graphic artist or a design person.

It’s intimidating at best to us out there that don’t have any design/artistic abilities. What is wrong with a couple of charts and a couple of tables to get the point across.

Sorry but just my feeling on this.

@GuyJohnson It is all about Data Story telling, if your end user can get the idea of what you are showing them in first 10 seconds of seeing the dashboard then your end goal is achieved. You don’t need to decorate a dashboard to make it look good, only few elements related to the data and boom you have a great report, for example someone above used glasses and without even looking at the data I know this report is somehow related to eyes.