Hi Team,
Request your help regarding customer buying pattern. I am attaching an Excel Data model (with PowerPivot) where I have sales data, product master and criteria table. Basically I would like to find out list of customers who have bought “ABC” product but not “DEF” product. I need to put my slicer from “Criteria” table so that I can share actionable insights with my sales team. I have gone thorough many other sources and videos but I couldn’t find the solution.

Please help me in this regards. You may change or content in any table.

Interesting problem. Here’s how I addressed it:

Here’s the measure that does the heavy lifting:

And here’s what it looks like all put together: 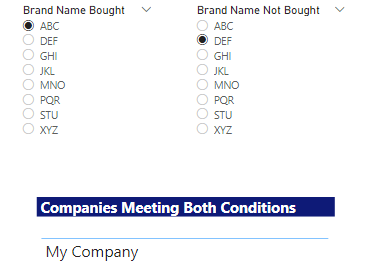 I hope this is helpful. Full solution file provided below.

Thanks a lot @BrianJ for your prompt response as always. I have one issue though. In my practical data (my organization’s data) I have long list of brands where my key key filter is “Segment”. When I am putting “Segment” as slicer then nothing is happening in “Brand Name Bought” and “Brand Name Not Bought”. Where as it should also get filtered while selecting segment in slicer. Please find attached screen shot. 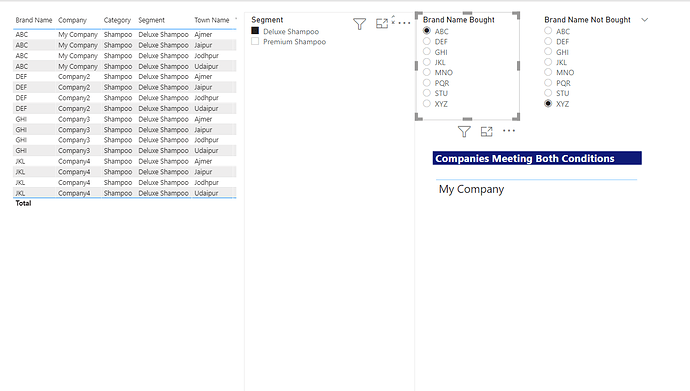 Any suggestion on this please.
Thanks & Regards
Harish Rathore

Here it is in action: 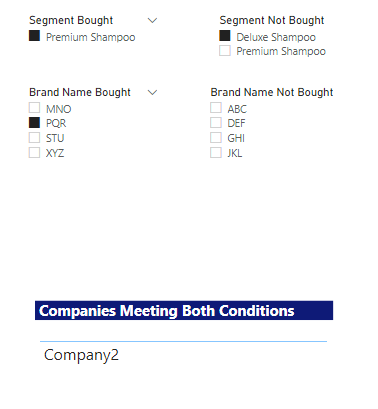 I hope this gets you what you need. Revised solution file attached below.

Hi @BrianJ . I am finding one difficulty though, while everything is working fine but after selection of slicers, Volume figure is not correct in the table for selected slicer. Pls find attached screenshot and help me in this regard. Volume should be selected segment and selected brand (for those who have bought products)

Can you please do me a favor? I am swamped for the next couple of days with a number of short deadline projects, but don’t want to lose track of this one. Can you please open a new thread with your question and provide a mockup of the specific visual you want to see with correct numbers, so I can validate my solution against that?